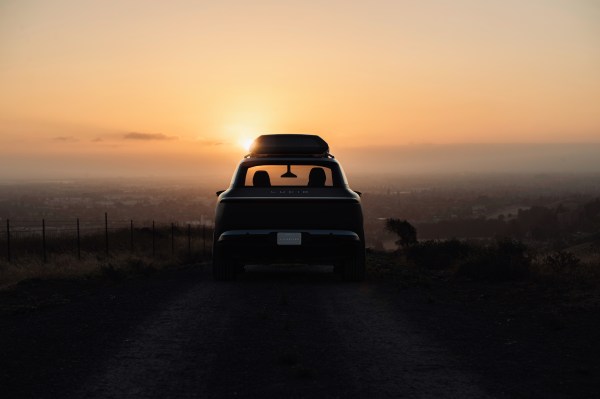 Lucid Motors provided Wednesday a peek of the next vehicle in its all-electric lineup — an SUV called the Lucid Gravity.

The Lucid Gravity follows the Air, a luxury all-electric sedan that was revealed Wednesday in a live streamed event. The Gravity, which will have the same underlying vehicle platform as the Air, is already well into the design process. The company has a working prototype, which was spotted this summer out in the wild. Lucid Motors CEO and CTO Peter Rawlinson later confirmed the SUV’s existence. This is the first time the company has publicly shared photos of the SUV.

Not much is known about the SUV, although the photos released Wednesday provide a few hints of what is to come.

The Air and Gravity share a few design features, notably the outline of the trunk and single long taillight, features that Lucid’s vice president of design Derek Jenkins told TechCrunch in a recent interview would show up in future vehicles.

“The opening of the trunk is on sides of the vehicle and so that allows this super clean rear end, and a single piece taillight, which I think is very distinctive,” said Jenkins describing the Air. At the time, Jenkins noted that future vehicles would likely have same the long light blade that can be seen on the Air. Photos of the SUV don’t show the front, leaving that feature a mystery for now.

The photos also show a rooftop storage unit, suggesting that Lucid is creating a line up of accessories to go with its electric vehicles.

While Lucid hasn’t disclosed when the SUV would come to market, Rawlinson has said the company’s next vehicle would go into production in 2023.